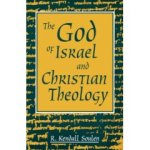 There are some books that are simply a must read for people who want to get theology and to understand the place Israel must have in Christian and Messianic Jewish theology.

A book I cannot recommend highly enough is R. Kendall Soulen’s The God of Israel and Christian Theology (get it here). If you click on the Supersessionism category to the right you can read some old articles on here about Soulen and his critique of Christian gnosticism and the Standard Canonical Narrative. It is powerful and liberating reading. 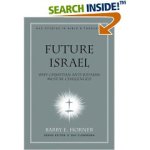 I would be thrilled if every Christian pastor read Barry Horner’s Future Israel. Horner addresses, in a way that my pastor friends will be able to hear and respect, the greatest theological error and oversight in mainstream Christianity, including evangelicalism.

The greatest theological error of Christianity is supersessionism (a.k.a. replacement theology), the nefarious idea that Israel’s place in God’s plan was somehow forfeited and that God put the universal church in Israel’s place of promise, covenant, and blessing.

Barry Horner’s book is ideal for addressing this issue for three reasons:

1. Horner is part of the Reformed tradition, a theological tradition strongly associated with supersessionism. Thus, his philo-Judaic words have a kind of integrity that simply must be heard.

I’ll have much more to say in coming weeks about Future Israel. Next time, I want to share some wonderfully insightful words from the endorsements by Jim Sibley of the Pasche Institute for Jewish Studies, a Christian program designed to train Christians to be effective at communicating the gospel of Jesus to Jewish people and David Brickner of Jews for Jesus. Those who know my philosophy know that I have differences of opinion with some of the methods of Jews for Jesus and various Christian missions to the Jews. Yet, this is one of those cases where I must confess we share a common love for Israel and an awareness of the centrality of Israel, so often overlooked, in the Christian Bible.