Passover and the Last Supper, Part 3 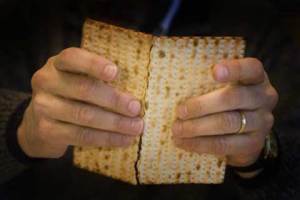 What are we to make of the seeming contradiction between the synoptic gospels (Matthew, Mark, Luke) and the Fourth Gospel regarding the nature of the Last Supper and the timing of Yeshua’s crucifixion? The synoptics clearly regard the Last Supper as a Passover Seder (Luke 22:15, “I have eagerly desired to eat this Passover with you before I suffer.”). Yet John appears to believe Yeshua crucified before the time when the temple officials held their Seder. Yeshua is depicted as the Passover lamb and some details suggest he was crucified when the Passover lambs were slaughtered, on the afternoon of Nisan 14, before the Seder.

As I see it, we have four options:

1. Assume that the synoptics are right and John, written much later, is in error (this is more logical than option 2).

2. Assume that John is right and the synoptics are in error.

3. Solve the conundrum by assuming that Yeshua followed a different calendar than the temple officials (the Essene calendar has often been suggested, though that solution has numerous problems on close examination).

Alfred Edersheim’s The Temple: Its Ministry and Services

Edersheim, who lived from 1825 to 1889, is one of the predecessors of Messianic Judaism. He was a Jewish scholar who came to faith in Christ. His knowledge of rabbinic literature was vast though he did not remain faithful to Judaism after placing his faith in Jesus. Edersheim’s writings at once appreciate and disparage the rabbis, perhaps reflecting an internal conflict between the value he found in the rabbis and the Christian milieu which encouraged anti-Judaism.

In his book on the temple, Edersheim has an appendix called, “Did the Lord Institute His Supper on the Paschal Night?” Writing in the nineteenth century, Edersheim saw what many in the twenty-first apparently cannot. He saw that John, like the synoptics, portrayed the death of Yeshua as occurring on Nisan 15, the afternoon after the Seder.

I formed many of my thoughts on the subject from the happy coincidence of having read Edersheim long before I considered these questions in detail. On this matter I am convinced that Edersheim did not lead me astray. I encourage those who wish to know more to turn to Edersheim’s book and his appendix. I will not quote him at length though my interpretations are mostly the same as his.

Resolving the Apparent Conflicts Between John and the Synoptics

In Part 2 of this article I detailed a number of reasons it seems apparent that John believed Yeshua to have died on Nisan 14, on the afternoon before the Seder. I will in this section attempt to resolve those issues and then in the next section give positive evidence from John that the crucifixion took place on Nisan 15, the afternoon after the Seder and the same day as indicated in the synoptics.

The first resolution is the most important and the key to understanding the whole issue. I understand that pastors and Bible students often do not study the Torah of Israel in depth and so I am not surprised many of them miss out on this. Yet I have to wonder about the scholars who should do their homework and know better. I cannot comprehend why some of my colleagues in Messianic Judaism and why the scholars whose books I read seem ignorant of one simple fact: there is more than one kind of sacrifice that could be called the Passover.

Not only did families and havurah groups or ten to twenty people line up at the temple on Nisan 14 to slaughter lambs for their Seder (Josephus claims 250,000 were slain at Passover each year), but there are other sacrifices of Passover as well. On the first day of Unleavened Bread there was an additional sacrifice to be offered (Num. 28:18-22).

This special offering for the first day of Passover (Nisan 15, the day I am saying Yeshua was crucified in agreement with the synoptics) included 11 extra animals in addition to the morning and evening lamb offered year round. Ten of the eleven animals were for a burnt offering: two bulls, a ram, and seven lambs. The eleventh was a sin offering of a male goat.

How important was this offering on the temple calendar? It was of immense importance. There were only a limited number of feasts in ancient Israel and a limited number of days when extra offerings were made. The rabbis gave a name to these sacrifices (not found in the Bible): the chagigah or festal offerings. They are commemorated today on our Seder plate. The Passover lambs of Nisan 14 are commemorated with a shankbone on the Seder plate and the chagigah offerings of Passover (Nisan 15) are commemorated with a roasted egg.

How does the monumentally important offering of Nisan 15 relate to the timing of the death of Yeshua in John? It is the key.

All of the rest of the problems in John fall in line once this one fact is realized.

What did it mean that Pilate wanted to release Yeshua as was a custom at the Passover? It meant that on Nisan 15, the first day of Passover, Pilate would release one prisoner. It makes less sense to assume that Pilate would hold such a ceremony on Nisan 14 while massive crowds were busy preparing for their Seder by slaughtering and flaying their lambs.

What did it mean that it was the day of preparation for the Passover? Two meanings suggest themselves: it was a Friday and preparations had to be made before sundown and/or the chief priests were preparing for the chagigah offering they were about to make in a matter of hours.

What did it mean that the coming Sabbath was a high day? Again, two meanings stand out: the Sabbath during Passover week was a special Sabbath and/or this could possibly be the day the firstfruits were offered in the temple (this is debatable and involves a controversy between the Pharisees and Sadducees).

Evidence that John Knew Yeshua Died After the Seder

1. The story of the Upper Room (John 13-17) could easily be seen as the Last Supper and a Passover Seder, though it lacks many of the Seder details spelled out in the synoptics.

2. The priests’ decision not to enter Pilate’s fortress lest they be unable (due to impurity) to eat the Passover, makes more sense if “Passover” here means the chagigah offering of Nisan 15 and not the Seder which comes earlier. Most types of impurity were cleared up at sundown. If the priests were approaching Pilate’s fortress on Nisan 14, they need not fear as much that they would miss the Seder after sundown as they would fear being unfit to eat the chagigah if the day was Nisan 15 and they were only hours away from making that offering. In other words, their reticence makes more sense if we read John in harmony with the synoptics.

4. The Talmud (b. RH 5a) says that all the sacrifices of the week of Passover are called “the Passover.”

The Last Supper of Yeshua was a Passover Seder. We should be no more surprised that John does not make this clear than we should be surprised that John is the only gospel which does not mention the bread and wine which Yeshua called his body and blood. It is difficult as well to find fault with the synoptics for omitting any reference to a Passover lamb when John omits any reference to what may be regarded as the most potent symbol in the history of Yeshua-faith: the bread and wine that form for various Christian groups the Eucharist or Communion Service or Lord’s Supper.

It is my desire to put to rest, for as many readers as possible, any talk of Yeshua following a sectarian calendar which differed from that of the temple. I also hope to discredit any concerns that either John or the synoptic evangelists did not know on what day Yeshua died or what the nature of the Last Supper was. It was the Passover that Yeshua eagerly desired to eat with his disciples before his death.

9 Responses to Passover and the Last Supper, Part 3