Suddenly Sabra and Jews for Jesus

I just read an article in the Jerusalem Post and it brought up for me my former life and a whole host of issues about Jewish-Christian relations.

“Suddenly Sabra” is a recent American immigrant to Israel. She comes from the deep south (who knows, maybe Atlanta). She is liberal and in favor of a two-state solution in Israel and even says she does not believe Israel needs a Jewish majority to thrive and survive. (Note: Sabra is a nickname for native Israelis and is being used tongue-in-cheek as this young lady is an immigrant and not a Sabra).

She is someone who has a bad taste in her mouth from Christian Missions to the Jews and particularly Jews for Jesus. 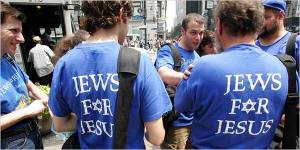 Recently on a Friday afternoon, Suddenly Sabra, went out for humus with her boyfriend (husband?). This is a common ritual in Tel Aviv for the many ready to slow down for a Shabbat experience and enjoy their weekend. The humus restaurants are usually quite crowded. This week, they were crowded with a band of Jews for Jesus in their blue shirts.

Suddenly Sabra was mortified and then furious at the intrusion of these Jew-converting missionaries in “her” humus hangout. The intensity of her emotion came from a lifetime experience in the U.S. of dealing with such missionaries. Her grandfather had taught her to deal with them on the street with a simple comeback line: “Jesus was a good Jewish boy.”

What is the source of such hard feelings a liberal, young Jew feels for these Jews for Jesus missionaries? Is her animus justified or ridiculous?

While I never worked for Jews for Jesus, I did work for a Christian mission in Atlanta called Light of Messiah. I used to stand on street corners, such as International and Peachtree in downtown Atlanta, handing out pamphlets for God. I saw myself as a modern disciple of Paul the Apostle, preaching in the synagogues and market-places. I distributed hundreds of thousands of pamphlets and occasionally encountered angry Jews on the street. Angry Jews were a sign of blessed success.

My own feeling now is that Christian missions to the Jews are woefully misguided and much more effective at fundraising amongst naïve Christians than at introducing Messiah to his own Jewish people.

If that verdict sounds harsh, believe me, I feel it too. I know these people and they were part of my world for a decade. I know them as good parents and dedicated followers of Jesus who practice love and good deeds. I know them as salt of the earth, caring people. But there is something rotten at the core which spoils the whole, something which explains the ire of little Suddenly Sabra at her humus café in Tel Aviv.

Christian missions to the Jews fail on three accounts, in my opinion. First, their view of Jewish people is a very low one in spite of their professed love. Second, they offer a shallow half-gospel to their own Jewish people. Third, they play to the donors at the expense of their alleged people.

As I am writing this, I think of friends in these Christian missions for whom I have an abiding affection. There is much we agree about. I do think Messiah is so needed by our people, religious and non-religious, old and young. I think I am no less passionate about my desire to see Messiah known amongst his own people. But I do not believe the end justifies the means. Messiah must be made known as Messiah would have it and not through deliberate conflict which undermines the very message.

First, I urge my friends in Christian missions to repent of their low view of Jewish people, history, culture, and religion. That low view is epitomized by a recent commenter here, himself a volunteer with a Christian mission, who criticized me for associating with “unregenerate rabbis.” This is a world view in which the majority of humanity walks around with a mark on their forehead: “unregenerate, worthless and dead until such time as they are turned on by God.” It is interesting that the key verse for this view, from Ephesians 2, was used not to demean humanity, but to praise the new life God gives. I do not believe, nor does Biblical theology support, the idea that apart from Messiah, humanity is worthless. Analogies like being dead and coming to life should not be pressed so far. When they begin to contradict the numerous Biblical examples of God working in humanity apart from Messiah, then such analogies are being abused.

This is not the place to demonstrate my point, I am going on too long already, but the “unregenerate” rabbis have the hand of God all over their work. Have many of the rabbis of tradition made sinful and erroneous statements? Of course and so do we “regenerate” people. But those who castigate the damnable “rabbis” generally know so little about them they couldn’t even write a couple of fortune cookies worth of profound rabbinical sayings.

Second, I urge my old friends in Christian missions to offer a whole gospel. The gospel is surely not, “God has a wonderful plan for your life, to take you to heaven when you die.” Evangelical Christian thinkers and movers (I might name Scot McKnight as a very promising example) are moving away from this shallow, revivalistic gospel in droves. The gospel is about the coming reign of God, the kingdom, and being part of God’s work now as we wait for its full arrival then. God does not call us out of the world into the smug fellowship of the “regenerate,” but into our own people to be Messiah’s representative among them. For Jews, this means being better Jews, Jews whose passion and meaning is heightened by association with the only Messiah and Lord, Yeshua.

Instead, Christian missions are calling on Jews everywhere to become dropouts, walking Gentiles with Jewish ancestry. There is no synthesis of Judaism and Christianity possible in the minds of these missionaries. It must be Christianity with Jewish identity reduced to a mere label. This is not New Testament ecclesiology. It not how James and the Jerusalem congregation would view things at all, nor Peter nor Paul. It is purely an invention of supersessionist Christian theology which the missions have not yet repented of. But, oh the joy of the day, when we perhaps will see these missions and their leaders repent and embrace a full gospel. May it be in our days, quickly and soon.

Finally, I urge my friends in Christian missions to make Jews and not Christian donors the center of their work. This charge is, I know, heinous and cruel of me to make. It was indeed my experience directly in Jewish missions life. I am ashamed of the things we did to look good for donors. I considered naming some of them, but as I participated in them for a time, I am too ashamed to be so bold.

Who cares if the money will dry up if missions start proclaiming a full gospel to a people viewed as God’s beloved instead of unregenerate nothings? Who cares if actual engagement with Jewish life is not good for fundraising? Is shameless huckstering of harmful methodologies to pander to Christian donors worth it?

The wonderful thing is that the Christian donors are wising up. The days when news of many pamphlets being handed out to New Yorkers who could care less about receiving them will thrill Christian donors are drawing to an end. The changing face of American churches has its ups and downs. One of the ups is that the parts that will survive involve a wiser anthropology and a fuller view of the gospel. It is past time for my missions friends to change.

And it is too late for the generation of Suddenly Sabra. Her trust has been so violated, it will not likely be restored. But perhaps Messiah himself is waiting for that next generation, the one to whom we can represent Messiah accurately, as a Jew within Judaism calling for regeneration within and not from without.

IT guy working in the associations industry. Formerly a congregational rabbi. Dad of 8. Nerd.
View all posts by Derek Leman →
This entry was posted in Christian, Gospel, Judaism, messianic, Messianic Jewish, Messianic Judaism and tagged Christian missions, Jews for Jesus. Bookmark the permalink.

4 Responses to Suddenly Sabra and Jews for Jesus