Can Anyone Tell Me What the Gospel Is? 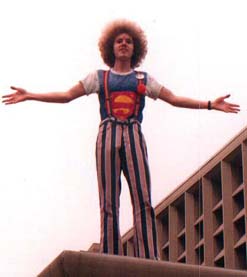 Gospel is a funny word. I heard a long time ago that it comes from a middle English term, God-spell (no, I didn’t see the musical). The idea is that people are captivated by God through faith and caught, as it were, in a spell.

While that may be true, and I would agree God holds me spellbound, it is not what the term translated gospel in the New Testament is all about.

Actually, gospel translates evangelion, or good news. The ancient term finds its clearest context in the image of a messenger running from a battle to the worried population of a city. Will there be death and rape and pillaging today, or did the men of our town defeat the invader? It is a question of life and death, not a light concern. As the messenger approaches, he can be seen for miles and the dreadful anticipation of his message is the only thing anyone in that town is thinking about. Will it be disaster or gospel, calamity or evangelion, suffering or good news?

Our text at Tikvat David this Shabbat was a portion of Revelation 14, including verses 6-7:

Then I saw another angel flying directly overhead, and he had an eternal gospel to proclaim to those who live on the earth—to every nation, tribe, language, and people. He declared in a loud voice: “Fear God and give him glory, because the hour of his judgment has arrived, and worship the one who made heaven and earth, the sea and the springs of water!”

I asked my congregation, “What is the problem some people would see with this passage?” The answer came quickly, “It doesn’t say, ‘Believe in Jesus and be saved.’”

The apostolic use of the term gospel is distorted by so many things in contemporary and traditional religion. We have “gospel sermons” in many churches, or people complain if a Christian pastor does not “share the gospel” each week in his sermon. In many faith communities this means that the speaker must tell listeners “how to be saved.”

There are different elements people feel must be included in a “gospel” message: believe, Jesus died, be saved, not by works, if you want to be saved come forward during the invitation, etc.

The time is fulfilled, and the kingdom of God is at hand; repent and believe in the gospel (Mark 1:15).

. . . an eternal gospel . . . “Fear God and give him glory, because the hour of his judgment has arrived, and worship the one who made heaven and earth, the sea and the springs of water!” (Revelation 14:6-7).

We learn from this that the gospel is not a singular message. It is a larger concept with many forms.

The gospel has an objective and a subjective sense. All three versions imply the coming of God to judge. Since the kingdom is coming, repent before it is too late. Messiah died for our sins, because God will judge. Fear God as the hour of his judgment has come. The objective sense is the reality of God and his order which overturns every other order and calls for us to reorder our lives.

Too Small a Gospel?
The problem with the gospel as it is held in some faith communities is that it is too small.

In some places gospel does not include fearing and glorifying. There is a decided lack of vision for something bigger than ourselves, a kingdom, a reality which overtakes all false visions of reality.

If the gospel is merely a personal decision to receive a gift with no commandment to find one’s place in the larger mission of God, then it is a weak gospel. I am not alone by any means in saying the gospel of many faith communities needs an overhaul. There is much good in the communities which preach a limited gospel, but the signs of weakness are everywhere.

God’s rule on earth will be so much greater than people think. God is healing and perfecting creation and completing what he started building in the lives of people all over this earth. Those who fear and glorify see themselves not merely as recipients of a free kingdom which makes no difference here and now, but as servants to each and every person and to creation itself. The gospel is about God turning evil into good and there is plenty of work for those who fear and glorify, work in healing, helping, raising, restoring, building, feeding, giving, forgiving, representing, preserving, growing, repenting, and living.