Noah in Context: Meaning and Purpose 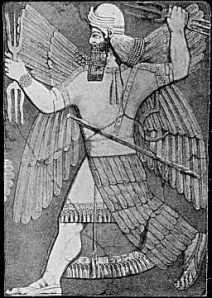 What if the ruler(s) of the heavens were capricious, vindictive, and immature? At times, life is harsh and it’s not hard to think the whole thing is run on the whims of an angry god.

What if the benefits and victories of life, too few and far between, are random acts of benevolence by limited deities with no universal scope or consistent justice? The race is not to the swift, after all, and good things happen often to those who do not deserve them.

What if the deities are as scared as we are, overpowered by forces beyond even divine control?

What if God were to enact genocidal destruction at every great failure of society?

These issues, and more, form the difference between the Mesoptamian flood myths and the Noah story. Though the stories are similar in many details (a vessel which saves one man and his relations, animals brought on board, the vessel resting on a mountain as the flood recedes, sending out birds to check for land, a sacrifice following the flood), the world of meaning could not be more different.

Mesopotamian religion, like many others, is based on the experiential difficulties of life. The goal is to prevent tragedy and maximize blessing through worship, appeasement, and he occasional use of professionals whose incantations can be a last-resort measure of life-manipulation.

In Mesopotamia and other ancient cultures, the deities were not the highest power. Above deity was a sort of realm of magic which gods and goddesses could use imperfectly to carry out their acts of power in the world. People were caught below the realm of deity and also below the realm of nature. The power of the gods was over the natural forces. The hierarchy looked something like this:

Through incantations, working with little power and almost blindly, people could sometimes successfully put pressure even on the gods. But for the most part, the gods could use their magic (things like tablets of destiny and so on) to control wind and fertility and life and death. People were at the mercy of natural forces and divine forces.

And the gods? They are immature, capricious wreakers of havoc. In the Sumerian flood myth and in the Atrahasis Epic, Enlil’s reason for destroying all life with the flood was noise. People were too noisy. He was having trouble sleeping.

If you’d like to understand the way ancient peoples viewed the gods, just read Homer’s Iliad. Greek religion is very related to Mesopotamian religion. And the Iliad is written about the time of Isaiah the prophet.

So, recognizing the way of the world at the time the Noah story was written. consider what a revolutionary and paradigm-changing piece of literature we have in the Bible.

The Message of Noah
You are living in the Ancient Near East. All the deities you have ever known were fearsome and immature. Your life depends on the whim of dozens of immortal beings. You know of a history of flood and destruction. You fear not only the death of your children to disease and starvation, but also that in your lifetime another deluge may come.

Then you hear the Noah story.

God’s reason for destroying life in the distant past was not something trivial. It was to control the spread of violence (hamas in Hebrew–yes, note the connection of the word to a certain Palestinian terror group). God cares about violence and evil and is doing something about it.

There is a purpose and a guiding hand in history. You find yourself in a new paradigm for understanding life. There is hope if a divine power, claimed by these storytellers to be the ultimate divine power, is at least doing something about the problem. You may never understand the cruelties of life completely, but there is comfort in knowing a divine being has a plan.

And Noah and his family were saved. They were not saved because they happened to be the favorites of some deity. Their salvation was not random. They were saved because Noah was a good man, a man whose life was characterized by faith in the One God, by deeds of righteousness.

God cares about how we live, whether we join the violence and corruption or participate in acts that heal the world.

And you find that in spite of all the pain and suffering, there is a blessing on the life of humankind. God gave it to the first man, Adam: “Be fruitful and multiply and fill the earth.” Did God rescind that blessing in the flood? In the Noah story, you find that God is still blessing humankind with fertility and spreading and growth.

People are not noisy pests disturbing the divine powers, we are the image of divinity blessed to fill and rule the earth. We ourselves are what would be called gods and goddesses. And what is above us is not some impersonal realm of magic and fear, but the ultimate benevolent deity.

All of the questions are not answered. We still wonder why some years there is too little rain or locusts destroy the crop. We still wonder why children die and why famine takes our old people all too early. Violence is not out of the world. God is not immediately solving all our problems.

But hope has arrived. The ancient stories have been misunderstood. God is in his heaven and smiles down on us, and he also weeps when we weep. This violence is not what he desires.

There may not be answers. But there is hope.

14 Responses to Noah in Context: Meaning and Purpose