I get so much every week out of following the cycle of Torah, reading commentators old and new, and seeing connections in ideas and events to the readings. If you are in the habit of reading, you know what I mean.

So many ideas and thoughts come from the readings each week, I never lack for topics to think about even as I settle into sleep at night.

This year, I am reading mostly Nachmanides (Ramban) on the Torah (last year was Rashi). And I have enjoyed the Ramban’s thoughts, especially interesting on Genesis 33:14 and a midrash which sees in this innocuous verse a Messianic prophecy.

But the thought I share with you this week is from a modern scholar, Robert Alter, author of The Art of Biblical Narrative and many other books. The following thoughts are developed from his translation and notes on Genesis.
…………………………………………………….. 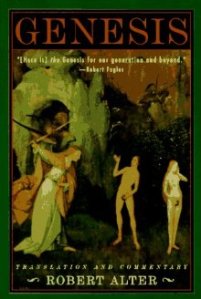 The image of wrestling has been implicit throughout the Jacob story: in his grabbing Esau’s heel as he emerges from the womb, in his striving with Esau for birthright and blessing, in his rolling away the huge stone from the mouth of the well, and in his multiple contendings with Laban. Now, in this culminating moment of his life story, the characterizing image of wrestling is made explicit and literal. (Genesis, p.180).

People have often understood the touching of Jacob’s hip to dislocate it as a sort of supernatural touch. Others have argued this was not supernatural, but a wrestling move. Alter makes a great case that the touch was indeed supernatural, since the verb is used in a form that means a light touch (p.181). Vs. 26 should be translated, “he touched [lightly] his hip socket and Jacob’s hip socket was wrenched.” The man wrestling with Jacob is not an ordinary man.

Many have wondered why the man wants the wrestling to end by dawn. Is he afraid of the light? Is this some sort of legend of a night creature who cannot face the light? Again, Alter’s comment is helpful:

But the real point, as Jacob’s adversary himself suggests when he refuses to reveal his name, is that he resists identification. Appearing to Jacob in the dark of the night, before the morning when Esau will be reconciled with Jacob, he is the embodiment of portentous antagonism in Jacob’s dark night of the soul. He is obviously, in some sense, a doubling of Esau as adversary, but he is also a doubling of all with whom Jacob has had to contend, and he may equally well be an externalization of all that Jacob has to wrestle with within himself.

In other words, the man does not want Jacob to see him and know his identity. The man wants to remain a mystery. Jacob’s wrestling encounter is a physical sign of the spiritual struggle that has been going on inside him. It is also a sign of the complex relationship between Jacob, obstacles, and blessing.

Jacob refuses to let the man go until he blesses him. Jacob has always sought blessing by extreme methods.

How much struggling was actually necessary for Jacob to receive the blessing of God? What conditions did God put on Jacob’s blessing in earlier promises? What do we learn from this?

The identity of the man wrestling with Jacob becomes even more clear when he gives Jacob a new name. Alter resists saying that the man is an angel or God, suggesting that having to ask for Jacob’s name is a sign of limited knowledge (p.181). Yet God often asks for what he already knows. The point God made by asking the name was to give Jacob a new one. Jacob, which can be rendered as “crooked.”

What does Israel mean? Many would merely say it means “he has struggled with God.” Yet Alter’s comment opens a surprising possibility:

In fact, names ending with the el ending generally make God the subject, not the object, of the verb in the name. This particular verb, sarah, is a rare one . . . though an educated guess about the original sense of the name would be: “God will rule,” or perhaps, “God will prevail.” (p.182).

In other words, the name Israel does not necessarily mean Israel is a people who struggles with God. It may mean God will prevail. Thus, the sense of vs. 29(28) should be, “You will be called Israel, God will prevail, for you have struggled with God and won.”

Verse 29(28) is a two-edged sword, praising Jacob’s persistence and desire for blessing while assuring him only the will of God will stand in the end and not the striving of men. God rewards persistence, but puts limitations on it as well. The lesson would seem to be something like: desire blessing and seek after reward, but know that it is God’s to give and not man’s to take. It seems God wants us to desire and then to trust.

The identity of the man who wrestled Jacob continues to be mysterious. Hosea 12:5 refers to him as an angel, “He strove with the angel and prevailed” (12:4 in Christian Bibles). Yet even in Hosea 12, the identity is both God and angel, for the very next verse seems to indicate that the angel was God or represented God, “HaShem the God of hosts, HaShem is his name.”

After his encounter, Jacob was limping on his hip. The sacredness of what happened to him, the angel of God wrenching his hip, led to a Jewish practice of avoiding the sinew of the hind legs. The common practice outside Israel is to avoid all cuts of meat from or near the hind legs. Kosher meat avoids all cuts, many of which are the most popular, from the hindquarters except in Israel where the sinew is removed.

5 Responses to Robert Alter on Jacob’s Wrestling Till Dawn