Yeshua and His Hanukkah Messages 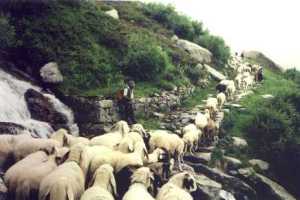 The theme which seems to have been in Yeshua’s mind as he spoke to his generation gathered at the Temple for Hanukkah was the effect of false shepherds on Israel’s well-being.

Yeshua’s messages are summarized in John 10, the whole discourse of which is said to have been given at Hanukkah (10:22).

The Hanukkah story is largely about false shepherds, men like Jason and Menelaus and the other nobility who were ready for a new era in Israel. They were ready to lead their people into the life of the polis, the Greek urban ideal. Jerusalem was to be called Antiochia and many priests were in training for the nude Olympic games of the Greeks, abandoning their priestly duties. They were eager to see an end to circumcision and wanted at least some kind of syncretism between Olympian Zeus and the God of Israel, if not the eradication of the worship of Israel’s God altogether.

It was through the interference of Antiochus IV that the High Priesthood became an office for sale to the highest bidder and was no longer the province of Aaron’s descendants. Jason’s Hellenizing reforms were not enough for Antiochus and so he appointed Menelaus in his place, a man not even from the family of High Priests.

This downward spiral of Israel’s shepherds led to a decree banning circumcision and Sabbath, fidelity to Israel’s God and dietary law.

But new shepherds arose for Israel, shepherds who led the people back to faithfulness, though in time these shepherds become corrupt in other ways.

How fitting, then, that the messages of Yeshua during the feast at the Temple were about sheep, shepherds, thieves, and sheepfolds.

Yeshua’s teaching at the feast relied heavily on Ezekiel 34 and with some reference perhaps to Zechariah 11 and 13 as well. Ezekiel 34 is about God as shepherd. He denounces false shepherds. He judges between the sheep. He sends the One Shepherd to lead his flock into the good sheepfold. The similarities between Ezekiel’s shepherd chapter and John 10 are striking.

In John 10:1-6, Yeshua differentiates the thief from the shepherd. It is as if Yeshua was saying, “What shepherds are you following, O Israel?” His parable of thieves marks them as those who come to their place illegitimately. It was not difficult to see the reference to the Sadducees and the whole aristocracy that held the population under its thumb a while colluding with Rome.

In John 10:7-10, Yeshua marks himself as the door in and out of God’s sheepfold. It was a bold statement, which he backed up later in his messages by pointing to the signs and wonders that accompanied his work wherever he went. The demonstration of his bona fides as a shepherd were not only healings, but also the character of his work. Yeshua, unlike the false shepherds, came to improve the life of those who followed him. He gave them a new family by teaching them about kingdom brotherhood and sisterhood. He offered them a hope of reversal and blessing in the Age to Come which was to start being enacted now, so that the downtrodden were raised up. He did not fleece the flock and leave them shivering in the cold as the Temple leadership of his time was known to do.

In John 10:11-13, he called himself the Good Shepherd, the One Shepherd of Ezekiel 34. The sign he will give to back up his claim is laying down his life. Any good shepherd would do this to save the flock.

In John 10:14-18, Yeshua notes that there will one flock led by one shepherd. Yet he refers to sheep from another fold who must be brought in as well. Yeshua is the one who at last fulfilled Israel’s calling to bring in the nations, sending his disciples out to the Roman diaspora to preach the kingdom. He is the one shepherd who unites the flock and does so by laying down his life.

In 10:22-30, Yeshua brings his message home. He says the signs he has been doing confirm his claims. He has been proclaiming his Messiahship, not by standing on a hilltop and shouting it, but by making the blind see and raising the sons of daughters of those who came to him in grief. In a season where people talked of the miracles of the days of the Maccabees, Yeshua says his miracles should be speaking to them. And he not only is sent by God, but if they can handle the truth, he is one with God.

Who are the shepherds of the Jewish people worldwide today? What ideas lead klal Yisrael, not just the minority of religious among us, but the whole community?

The signs of the Good Shepherd are now not as easy to see, being far removed. Yet the memory lives on and in particular the raising of Yeshua from the tomb speaks loudly for sheep ready to hear his voice. He did lay his life down for the flock of Israel and it did not stop the senseless hatred which led to the Temple’s destruction. But Yeshua’s act as Good Shepherd did create within the people of Israel and within the people of the nations a remnant. There is one flock worldwide, painfully divided by petty things, and yet, united in things that matter more. And the fold of the nations is large while the fold of Israel is small. Yet it will not always be so. As Ezekiel said, the One Shepherd will lead his flock as David returned. “You are my sheep, [Israel], the sheep of my pasture, and I am your God, says the Lord God.”

3 Responses to Yeshua and His Hanukkah Messages