The Yeshua in Context book, audiobook, and eBook is due for release in August 2010. I plan to publish a sourcebook as well with lists, charts, and further resources for study. In this podcast, we’ll explore the beginning of what will be chapter 10 in the book. We’ll set up the other topics regarding the Beatitudes which you can read about when the book is released. 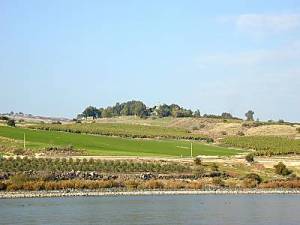 Most everyone knows the Beatitudes the sayings of Yeshua such as, “Blessed are the meek, for they will inherit the earth.” But what do these short sayings have to do with Yeshua’s Jewish context? How would his audience have heard them? What is going on with the Sermon on the Mount?

Matthew’s gospel, where we read the Beatitudes, is clearly arranged thematically. W.D. Davies and Dale Allison observe that Matthew first, before the Sermon on the Mount, sets up the divinely sent identity of Yeshua in the stories of his birth, fleeing to Egypt, baptism, and temptation (Matthew: A Shorter Commentary, New York, T&T Clark, 2004). Armed with the knowledge of who he is, the reader understands now that Yeshua must teach. The Sermon on the Mount is placed to be Yeshua’s teaching. It is followed by the deeds of Yeshua in chapters 8 and 9 and then the same deeds of Yeshua’s disciples in 10.

The Sermon on the Mount, then, represents a demonstration of the authority and message of Yeshua. It is part of a programmatic presentation of Yeshua in Matthew that follows a simple outline in the first ten chapters: identity, teaching, deeds, disciples.

In other words, you can make a pretty good case that the Sermon on the Mount is a sort of summation of the life message of Yeshua prepared after him by his disciples.

And the Beatitudes occupy a very important place in the Sermon on the Mount. They introduce the essential message of Yeshua. They are the epitome of what he stood for.

IT guy working in the associations industry. Formerly a congregational rabbi. Dad of 8. Nerd.
View all posts by Derek Leman →
This entry was posted in Bible, messianic, Messianic Jewish, Messianic Judaism, Yeshua and tagged Podcast, Yeshua in Context. Bookmark the permalink.

2 Responses to PODCAST: Yeshua in Context – Beatitudes and Hope