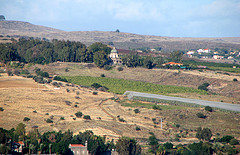 In the common thinking of the people, the kingdom of God would come suddenly and completely. One day the people would be oppressed and burdened with foreign rule and then the kingdom of Israel would rise meteorically and smash the foreheads of Moab and Seth (see Numbers 24:17). In the second Jewish revolt, around the year 130 C.E., people even gave the name “Son of the Star” (Bar Kochva) to the rebel leader, Simon. Expectation was of either a human or heavenly king leading the people to victory and a new age. The change would be drastic, complete.

If Yeshua’s Sower Parable is about the end of the exile and the word of Israel’s restoration, it disappoints expectant crowds with frustrating incompleteness, delay, and upheaval. The word of restoration, the seed, does not bring a complete crop. Birds eat it, rocks prevent its growth, and weeds choke it out. Only some of the seed grows to bear fruit.

To put it in the simplest terms, Yeshua spoke of a penultimate stage, a coming of the kingdom in part, an age to come being being realized progressively instead of suddenly.

This podcast introduces the Sower Parable, which was the topic at the very beginning of the Yeshua in Context Podcast in July 2009. We’re coming back to the Sower, looking for more specific meaning, and finding that this parable gets to the heart of what Yeshua intended to establish in this age, while we wait for his return. In the next podcast we’ll go beyond the introduction, beyond the basic key to the meaning, and discuss the crowds and inner circle, the community Yeshua was forming, and how this renewed Israel (extended also to a renewed humanity from the nations) would be the partial realization of the kingdom of God.

Watch for the book, audiobook, and ebook of Yeshua in Context to be released in August 2010. To pre-order, email me at derek4messiah@gmail.com

IT guy working in the associations industry. Formerly a congregational rabbi. Dad of 8. Nerd.
View all posts by Derek Leman →
This entry was posted in Bible, messianic, Messianic Jewish, Messianic Judaism, Yeshua and tagged Podcast, Yeshua in Context. Bookmark the permalink.

1 Response to PODCAST: Yeshua in Context – Seeds and Fruit