A reader sent an email with a few questions, including this one:

How do you address the word of Yaakov in Acts 15:19-21? To me, the implication is that these are the very basics…but as they learn about Moses (the Mosaic covenant), they would fall progressively into line with it. 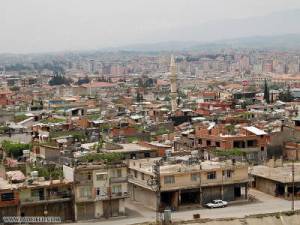 Acts 15 is a formative chapter in our understanding of Jews, Gentiles, and the congregation of Messiah.

For a long time, the consensus of readers of Acts was that chapter 15 meant freedom from certain Torah observances for non-Jews in Messiah. Then a new reading developed, one which allowed 15:21 to become a reversal, a verse which turns the entire chapter on its head, subverting the logic of the whole chapter and giving a new reading: Gentiles in Yeshua need not keep the whole Torah until they have had time to learn it in synagogue!

Some well-meaning lovers of Torah have become so used to this reading, I contend that they have lost objectivity in reading the chapter. Let me suggest that having become so used to reading Acts 15 through the lens of this set of One Law spectacles, these readers have managed to undermine the scriptural basis and logic of the apostles.

In order to present what I consider to be a consistent reading of Acts 15, let me outline and expound on some highlights of the chapter. I will conclude with a few observations about the unity of its argument which I think are the death-knell of the “verse 21 reversal” maneuver.

Vs.1 – In Antioch, some men (Pharisees) from Judea came with a teaching about how Gentiles are to be received: they must be circumcised (as proselytes, converted) or they cannot be saved.

Vss.2-4 – Paul and Barnabas debated and opposed this group, determined that the matter should be heard by Yaakov (James) and the Jerusalem community. At this point, the disagreement is framed by one issue: whether Gentiles need Jewish conversion to be saved.

Vss. 5-6 – Yeshua-followers from the Pharisees make their case that Gentiles must be circumcised (converted to Jewish status) and to observe the Torah of Moses. Now the issue has expanded to two concerns: (1) that Gentile need Jewish conversion to be saved and (2) that Gentiles need to keep the whole Torah. Issue (2) is preceded by a certain understanding, a Jewish interpretation of Torah which certainly arose in later rabbinic literature, but which may also have been extant at that time: that the righteous of the nations were not called to keep the whole Torah. The classic example became Noah, who had permission to eat all foods except blood, and upon whom there was no expectation of circumcision, a Temple for sacrifices, or of a Sabbath or calendar of holy days.

Vss. 7-11 – Peter’s testimony: God revealed to him to preach the gospel to the Gentiles, God gave the Spirit to these Gentiles and thus affirmed them, God made no distinction between Jews and Gentiles, why put the yoke of Torah on Gentiles when Israel has failed to follow Torah, we believe salvation is by God’s favor and not our worthiness. We should note for the issue we are considering that: (1) Peter said Torah was a yoke Israel could not keep and (2) Peter denied the idea of covenantal nomism, that Israel was saved because it was elected to receive Torah. What did Peter mean by (1)? He did not mean that it is impossible for a person to be diligent about dietary law and Sabbath. He meant that Torah’s demands go to the core of a person and no one but Yeshua could fully keep it. He meant that as a nation, Israel could not keep the outer demands, much less the core demands such as love and justice. The argument is essentially: it is the doers of Torah who are saved, not merely those who receive it.

EXCURSUS 1: How could Peter say God made no distinction between Jews and Gentiles when the chapter as a whole does make a distinction? This is not really a difficulty. Words mean what they mean in context and contexts usually have limits. Peter does not mean that God makes no distinction at all between Israel and the nations. This would be counter to the Torah and also to the rest of the ruling in Acts 15, in which it will be decided that Jews in Messiah have a different relationship to Torah than Gentiles. He means that in the most important terms (love, blessing, redemption, salvation, etc.), God makes no distinction. He never did. God was saving people before Israel existed (consider Noah). God always had in mind saving the nations and says so in Torah (especially Deut 32).

Vss. 13-18 – Yaakov (James) speaks and his word is taken as the judgment of the Jerusalem apostles. In vs. 14, his wording is carefully chosen. God has taken for himself from the Gentiles a people for his name. This language Yaakov will find in a scriptural precedent, Amos 9:11-12. Yaakov quotes from a version which is closer to the Septuagint. The citation as Yaakov uses it has the following connections to the situation being debated: (1) the tabernacle of David will be rebuilt, a promise Yaakov saw being fulfilled in the rise of the Yeshua movement in Israel, (2) that the rest of mankind would seek God, which Yaakov saw fulfilled in the preaching of Peter, Paul, and Barnabas, and (3) that there would be Gentiles called by God’s name. Point (3) is the crux of Yaakov’s use of Amos 9. God calls Gentiles without making them become Jews.

Vss.19-21 – Yaakov makes a ruling (“it is my judgment”): (1) that we not trouble the Gentiles and (2) that we ask for careful observance of four issues. Yaakov gives a further reason for his ruling, in addition to the argument from Amos 9. The additional reason is that Moses has been and is being read since ancient times in the diaspora synagogues. The emphasis is on past and current reading of Moses, not future.

EXCURSUS 2: What is mean by “not trouble the Gentiles”? The issue being discussed concerns two things: (1) requiring conversion to Judaism and (2) requiring Gentiles in Messiah to keep the whole Torah. That Yaakov is ruling against (1) is clear. That he is ruling against (2) is also clear in the larger context because: (a) the understanding of Gentiles in general at the time is of people not bound to the whole Torah, (b) Yaakov must be seen to address both issues that have been raised and not only conversion, (c) the rest of the ruling does not include Torah observance for Gentiles, and (d) the rest of the ruling concerns universal ordinances and not Torah laws which distinguish Israel.

EXCURSUS 3: Why these four issues (idol meat, sexual immorality, strangled meat, consuming blood)? It should be agreed that the Noahide laws are not in evidence, that their formulation is later than the first century, so it is very unlikely that Yaakov is referring to this concept. It is likely that Yaakov has in mind Leviticus 17-19, which are about holiness in the camp and the land of Israel. These chapters emphasize the sanctity of blood, refraining from idolatry, and refraining from various forms of sexual immorality including incestuous relationships. In Leviticus, these are seen as Gentile evils which would contaminate Israelites by association. Gentiles in Messiah must not live like Canaanites and contaminate the movement. It should not be inferred that Yaakov saw only these issues as applying from Torah to Gentiles, but that these were the most urgent issues.

EXCURSUS 4: What was Yaakov’s point about Moses being preached from ancient times until now in diaspora synagogues? Here we are at a key issue in the debate about whether Gentiles in Messiah are required to keep all of Torah (including commandments of special holiness for Israelites such as circumcision, dietary restriction, Sabbath, fringes, and holy days). One theory is that Yaakov meant Gentiles can start with the four basic Torah laws and will learn the rest in the future by attending synagogue, at which point they will be liable for all of them. There are many deficiencies in this view, of which I will name a few: (a) Yaakov’s point concerns not the future, but the past and present, (b) even if Gentile ignorance was allowed for, this would not explain why Paul and Barnabas had not been teaching Torah to their congregations, (c) if the Gentiles eventually get circumcised and bound to Torah, then why argue with the Pharisees at all since they apparently were right about everything except requiring Torah for salvation, (d) why quote Amos 9:11-12 from the Septuagint if, in fact, God only accepts Gentiles as de-facto Jews, (e) evidence from the epistles is that diaspora Yeshua congregations did not meet in synagogues but separately, and (f) Acts 15 should be interpreted in harmony with Paul’s letters which speak repeatedly of a freedom from some aspects of Torah for Gentiles. So, what is Yaakov’s point, then? Yaakov likely means that the preaching of Moses from the past till now has not caused a mass movement of Gentiles to come to God. But the preaching of a gospel for Gentiles, one in which conversion is not expected, has started a mass movement. It is apparent that God’s hand is on the preaching of Paul and Barnabas which has neither required conversion or full Torah observance of Gentiles.

Vss. 22-35 – The Jerusalem council writes a letter to Antioch and the other congregations. It does not include Yaakov’s point about Moses in the synagogues. It would seem therefore that Acts 15:21 could not be considered the crux of the Jerusalem council since it is not even mentioned in the letter. The preaching of Paul and Barnabas is affirmed. Their freedom-from-Torah message is approved for Gentiles. The Pharisees who wanted to require conversion and Torah-observance is rejected. The letter causes rejoicing and the Gentile mission is further organized.

–Acts 15 assumes that Jewish people in Messiah are yoked to Torah, but not for salvation.

–Acts 15 rules that non-Jews in Messiah are not bound to the whole Torah.

–This does not mean that non-Jews in Messiah are free to ignore all of Torah — Torah must be interpreted to determine what is universal and what concerns the special holiness of Israel as a people.

–This interpretation assumes a certain way of reading the Torah and the Bible, and not assuming that the Bible covers every case specifically; the Torah is case law, not regulation of every instance (which would require a law code a thousand times as long as Torah).