The Tithe in Ancient Israel, Pt 1 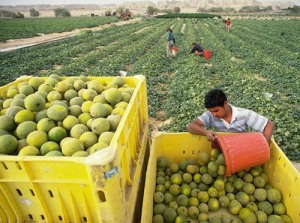 In Judaism, ten percent (a tithe) of net earnings are to be given to tzedaka (charity). This is regarded as an obligation. A family member in need is the highest priority, followed by local needs of the poor, needs in Israel, and then other organizations. Giving to the synagogue is a separate matter, usually a matter of annual dues and various fundraisers.

In Protestant Christianity (I am less familiar with Catholicism and Eastern churches), ten percent of gross earnings (some might say net) is due to the local church. This requirement has been tested and measured in many studies and the result is that very few (something like 10%) of church-going Protestants actually give the full ten percent (tithe). Giving to charity and mission organizations is a separate matter, usually said to be above and beyond the tithe.

Both of these modern conventions are adaptations of the tithe in Ancient Israel. What was the tithe about and what force does it have today in our very different situation?

The Most Relevant Scriptures

There are a number of scriptures which reflect later concerns and issues about the tithe, such as the familiar sermon of Malachi about bringing the tithes to the storehouse. Also, in Nehemiah and Chronicles we have some verses about the collection of tithes and so on. But the formative passages are in the Torah. It should be of note for Christians and Messianic Jews that the tithe is not mentioned in the New Testament except in Hebrews 7, referring to the story of Abraham tithing to Melchizedek.

–Genesis 14:20, Abraham gives a tithe of the spoils to Melchizedek.

–Genesis 28:22, Jacob vows to tithe to the Lord when he returns to the land.

–Leviticus 27:30-33, An as-yet-unexplained regulation of tithes and redeeming them for money, to the Lord, consisting of crops and animals.

–Numbers 18:21-31, The first explanation of the tithe-obligation, to the Levites, only a tithe of crops is mentioned.

–Deuteronomy 14:22-27, The second explanation of the tithe, eaten by the owner in a communal meal, of crops and animals, able to be redeemed for money.

–Deuteronomy 14:28-29, A third-year tithe stored in towns for the poor and the Levites.

There is another passage, but it is not as formative, in Deuteronomy 26:12-14, in which the Israelite declares to the priest that all the dues to the Temple, including the tithe, have been given properly.

On Difficulties in Harmonizing and Various Systems

It is clear that the idea of tithing came before the laws of Torah were given. Jacob Milgrom details tithe practices in other nations as a prelude to his investigation (JPS Commentary on Numbers, Excursus 46, pp. 432-3).

The first mention of the tithe in the legal sections of Torah is unexplained, suggesting that the people already knew their obligation to tithe and that these laws simply specify procedures for something that was already done. Leviticus 27:30-33 says the tithe is all to the Lord, which most likely means to the priests.

The second legislation of the tithe suggests (Numbers 18:21-31) it is all to the Levites who in turn tithe to the priests. This can easily be harmonized with the Leviticus regulation since the relationship of Levites and priests is rather ambiguous anyway.

The third and fourth legislation (Deuteronomy 14:22-27 and 28-29) are more difficult to harmonize. Critical scholars suggest that these reflect a change in Torah. The earlier laws, they say, go back to a time when there were temples to the Lord in every major town and when the Levites required a large base of support (Milgrom, 434-5). But once there was only one central sanctuary (Deuteronomy 12), they say the law changed, so that the priests received the gifts of Israel while the Israelites kept their tithe and used it at the festivals.

Looking at the history of the tithe is, for one thing, a matter of deciding if we believe Torah is a unity or a combination of possibly contradictory sources.

For those of us who see Torah as a unity the tithe laws are a challenge and different harmonizations have been suggested over the years.

–The three-tithe system, as in the book of Tobit. E.P. Sanders discusses the interpretations of the tithe available to us from Second Temple and early rabbinic sources. In a strict interpretation, there were three tithes. Tobit gave a tithe to the Levites, spent a second tithe in Jerusalem at the feasts, and every third year gave a third tithe to the poor and Levites (Judaism, Practice and Belief, 148-9).

–The two-tithe system of the Mishnah (Tractates Maaserot and Maaser Sheni). This system required that in each year two separate tithes were set apart except every seventh year. The idea that tithes operate on a seven-year system may seem confusing at first, but it is a matter of combining the tithe laws with the law of resting the land every seventh year (and if there are no crops in the seventh year, there can be no crop-tithe). The first tithe (ma’aser ani, ma’aser Levi) is given in every year but seventh years to the Levites (as per Leviticus and Numbers). A second tithe is set apart in years one, two, four, and five to be eaten at the Temple (as per Deuteronomy) and for the poor and Levites in the third and sixth years (also as per Deuteronomy).

–What about the tithe on animals? The Mishnah assumes that tithed animals were not given to the Levites and priests. They were eaten by the worshipper at the Temple or redeemed for money as per Deuteronomy.

–What about the added fifth of Leviticus versus no added fifth in Deuteronomy? It was assumed that if you redeemed first tithe for money, you must add a fifth (as per Leviticus). But if you redeemed a second tithe, no fifth was added (as per Deuteronomy). When we speak of redeeming for money, we mean that the stored crops and animals were exchanged for money and then the money was used in Jerusalem as a gift or to purchase food there.

This is all background for considering the history and meaning of tithes. In the second part, I will summarize and consider some implications as we search out the meaning of the tithe laws and consider application in our communities today.

7 Responses to The Tithe in Ancient Israel, Pt 1