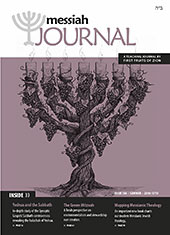 FFOZ’s latest journal, Messiah Journal 104 is now available and has some very important articles for our community. To subscribe to Messiah Journal, go here.

One thing I hope you will read is my own review of Richard Harvey’s important book, Mapping Messianic Jewish Theology. Harvey’s book is very important for understanding the diversity in Messianic Jewish thought and for getting some ideas about where MJ should go in the future.

There are articles about Yeshua’s Sabbath disputes, the Sabbath and Gentiles who want to observe, thoughts on faith from the Elijah stories, a reflection on the Holocaust, a look at the Torah and environmental issues, the recent claim of Eilat Mazar that she has found a wall of the Solomonic Temple, and a translation of a midrashic section from Yalkut Shimoni.

I want to talk about the translation and content of this section of Yalkut Shimoni. This rabbinic work was probably compiled in the 1200’s and quotes from many earlier sources. It is a midrashic commentary on all the books of the Hebrew Bible.

Midrash is a kind of literature with creative interpretation of texts, stories of biblical characters that are not in the Bible, and parables and stories clarifying abstract theology. You almost have to read Midrash to get the idea.

Midrashic interpretation is not about being faithful to the original meaning of the text. It uses a variety of accepted tools (rabbinic rules of hermeneutics) to creatively make the text mean things that are not necessarily part of the intention when it was written. The meanings sought in the text are usually matters of theology or practice decided before the text was consulted (so it is eisegesis, but eisegesis done with flair!).

Midrashic stories are not supposed to have actually happened (generally). They are illustrations, not history.

So, why would anyone want to read Midrashic literature given all these facts about its playful rearrangement of reality? Well, while some passages of Midrash are quite pedestrian and uninspiring, this creative playing with text and truth often rises to the level of insightful genius.

Yalkut Shimoni on Isaiah Speaks of Messiah
Aaron Eby writes in Messiah Journal 104, “It [Yalkut Shimoni] speaks of a messiah whose soul exists before creation and is predestined to suffer for Israel’s sins.”

Many people have a wrong idea about Judaism. They regard it as a fixed system of opinions with no room for diversity. Actually, Jewish tradition is so rich and has contained so many points of view, it is possible to use tradition to justify a wide variety of beliefs and practices.

Those who would say that Messianic Jewish beliefs about the divinity of Messiah, the atoning death of Messiah, the manifestation of God as a man, and other concepts are beyond the pale of Jewish thought are not dealing with the entire deck of Jewish tradition. There are plenty of source texts and ideas in Judaism for divine manifestations, even corporeality, and for redemptive suffering.

Yalkut Shimoni has in it texts which add to the corpus of ideas in Jewish tradition which Messianic Jews can bring to bear on the discussion.

One story illustrates a high view of Messiah (though not technically his preexistence):

This teaches that before the world was created, the Holy One, blessed is he, looked forward to the generation of Messiah and its deeds. He hid [the primordial light] for Messiah and his generation beneath his throne of glory.

Satan said to the Holy One, blessed is he, “Master of the universe, for whom is the light that you hid beneath your throne of glory?”

He responded, “It is for him who will ultimately refute and shamefully rebuke you.”

“Master of the universe, show him to me,” he said.

He responded, “Come and see him.”

As soon as he saw him he became frightened and fell on his face, saying, “Certainly this is Messiah, who will ultimately cause my downfall, as well as all of the princes of the idolaters in Geihinnom. As it is said, ‘He will swallow up death forever, and the LORD God will wipe away the tears from every face’ (Isaiah 25:8).”

The idea here, that Messiah will defeat Satan and the entire power of evil in the universe is an idea far beyond the low view of Messiah sometimes represented in Jewish tradition: a human king who brings a golden age for Israel.

Messiah then has a dialogue with God about his suffering for the sake of saving Israel. There are some remarkable statements here including the following excerpts:

“The iniquities of those who are hidden with you will ultimately bring you into an iron yoke, and they will do to you like this calf, darkening its eyes; they will choke your breath with the yoke and with their iniquities. Your tongue will ultimately cling to the roof of your mouth. Are you willing on these terms?”

Messiah said before the Holy One, blessed is he, “Master of the universe, will this suffering last for many years?”

The Holy One, blessed is He, said to him, “By your life and the life of your head, I have decreed a week upon you; if your soul is in pain, I will expel the suffering at this time.”

He said to him, “Master of the universe, with a joyful and glad heart, I will accept upon myself on condition that not one of Israel will perish.”

The passage goes on to talk about beams of iron being placed on Messiah’s neck until he is weighed down. Later God says Messiah’s suffering will be like God’s own suffering since creation, longing for the redemption of the lost perfection of people and the world.

In perhaps an even more remarkable passage, the “fathers of the world” (Abraham, Isaac, and Jacob) say to Messiah that he bore the iniquities of humanity on himself!

This midrash connects Psalm 22 with Messiah, speaking of Messiah being imprisoned and mocked.

And Messiah will have an eternal reward for the merit of his suffering.

How could a late medieval Jewish source contain such ideas, which could easily give credence to Christian theology about Christ? I don’t have an answer, but I can say that Jewish exploration of the scriptures often leads in refreshingly honest directions. Jewish sages generally did not avoid interpretations which were problematic, but considered virtually every angle. The openness of Jewish tradition, even to be self-critical or to affirm ideas of those considered to be the enemy, is amazing.

Aaron Eby notes that scholarship on Yalkut Shimoni has suggested possible Christian influence, but that the prevailing opinion is against this. This midrashic text in no way affirms the full meaning of Messiah in Christian and Messianic Jewish theology. But, as Eby states, ” It can serve as a point of reference to help understand the Apostolic Writings in Jewish terms.”
………………

If you want to study Midrash, an excellent resource is the MidrashEtc. blog of MJTI’s Carl Kinbar. Find it here. You will want to start with some of the Pages listed on the left. You may also need to go back and read early posts to start.

2 Responses to Midrashes on Messiah