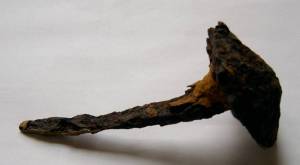 Mark’s account of Yeshua’s death is punctuated with irony. The story of the innocent sufferer in the Hebrew Bible is interlaced with the agony and incongruity of the punishment of the Son of God. The sky darkens with God’s anger, not least his anger directed against his own Son, suffering for his nation and his disciples, drawing on himself the anger of God and bringing the time of woes into reality. That Yeshua’s path to the Roman cross has been deliberate is obvious. That he faces it determined but with the cracks of human weakness is mysterious. That victory should look like this is unspeakable.

(1) Go to this link on derekleman.com or

IT guy working in the associations industry. Formerly a congregational rabbi. Dad of 8. Nerd.
View all posts by Derek Leman →
This entry was posted in Bible, Christian, messianic, Messianic Jewish, Messianic Judaism, The Cross, Yeshua and tagged crucifixion, Irony, Podcast, Yeshua in Context. Bookmark the permalink.