Conversations About Law and Grace, 4 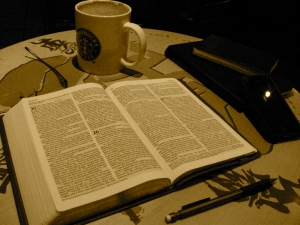 Chris and Jude pick up their discussion later over coffee.

Chris: Okay, I brought my Bible with me this time and now I’m going to make it harder for you.

Jude: I thought you believed the gospel should make it easier, not harder.

Chris: Funny. But you’re going to have to explain some Paul verses to me. I think I may have you on this one. Paul teaches a law-free gospel.

Jude: Yeah, we can definitely get to that. But have you considered first that Paul lived a law-full gospel.

Chris: What? Are you always so contrary?

Jude: I’m just saying that we should consider Paul’s actions in Acts when interpreting his statements in the letters.

Chris: Where should we look for this law-full lifestyle of Paul, then?

Chris: Yeah, we went over that. The only question there was gentile relationship to the law. It was assumed that Jewish followers of Jesus would continue in the way of the law. I’m not completely comfortable with it, but the logic seems sound.

Jude: Okay, now the big text is Acts 21 starting in verse 20. The first thing that happens is James tells Paul about the tens of thousands of Jewish followers of Jesus and all of them are zealous for the law.

Chris: Maybe James was doing the wrong thing. Luther rejected the book of James, didn’t he, because it was too law-centered? And James sent some men to Antioch and Peter started acting hypocritically. Could it be that James is a legalist?

Jude: Don’t you accept the authority of James as an apostle? And besides, in Acts 15, notice how grace-filled James’ understanding is with regard to the gentiles. James is not only on the same page as Paul, he is the one who delivers the ruling that gentiles do not keep the law like Jews.

Jude: Then James goes on in Acts 21:21 to say that Paul has been slandered. People have been saying that he teaches Jews out in the diaspora to abandon the law and the traditions.

Chris: That’s why I brought my Bible today. I can show you where Paul tells people not to keep the law.

Jude: We’ll get to that. But first, does James here in Acts 21 agree that Paul is a preacher against the law?

Chris: Well, no. I see in vs. 24 that James says “there is nothing in what they have been told about you.”

Jude: Right, and he says that Paul observes and guards the law.

Chris: I don’t see how that can be true. Paul says we are not under the law.

Jude: In time, but first, does Paul disagree with James or refuse on principle to carry out James’ plan?

Jude: You see that Paul instead goes along and undertakes a Nazirite vow, also paying for the sacrifices of four other men.

Chris: You mean he gave up raisins.

Jude: Funny. But aren’t you surprised that Paul offered sacrifices in the Temple?

Chris: Where does it say that? I don’t see any sacrifices? Paul wouldn’t do that?

Jude: First, it is what you do in a Nazirite vow, which you can read for yourself in Numbers 6. Second, it is what is meant by Paul paying the way for these other four and by the phrase “rite of purification.” Animal sacrifices are the way of purification.

Chris: Okay, maybe a worship or thanksgiving sacrifice, but not a sin offering, right?

Jude: No, there is a sin offering in the Nazirite ceremony.

Chris: But Jesus is our sin offering.

Jude: Another time we can talk about how the sacrifices in the Temple are different than the cross. But do you see that Paul’s life was Torah observant?

Chris: Yes, but maybe only when he was around Jews. Doesn’t 1 Corinthians 9:20 say that?

Jude: We’ll get to 1 Corinthians, but do you really think Paul had so little integrity that he played the law-keeper around James and lived like a Greek when in Corinth?

Jude: Our lattes are getting cold. What verses in Paul did you want to show me?

5 Responses to Conversations About Law and Grace, 4