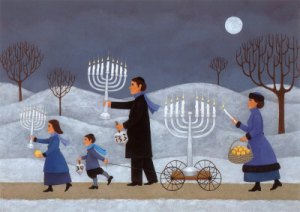 The first candles of Hanukkah will be lit on December 1 (a Wednesday night). People are already searching for Hanukkah articles and information. Here is a Messianic Jewish Musings Classic, a telling of the Hanukkah story Messianic Jewish style. Enjoy.

The actual miracle of Hanukkah is not about burning oil that lasted longer than was naturally possible. The story of the miraculous oil is a very late one and almost certainly didn’t happen.

The miracle of Hanukkah is like the miracle of Purim. It’s the kind of miracle we see in our world today. Bodies of water do not stand up in two heaps as caravans pass through. Theophanies from the midst of a storm do not speak down from mountains. But God is saving, healing, and preparing all things to be renewed. He preserves his people Israel and he spreads his name among the nations of the world as well.

The miracle Hanukkah is the preservation of God’s people Israel and preparing his people for the days of Messiah. If it had not been for Hanukkah, there might not have been a Jewish people for Messiah to be born into. The covenant promises of God would perhaps have failed. But history will never work out this way. Seen or unseen, God’s hand drives history in the direction of the world to come.

Great empires rose and fell. The Israelite prophet, Daniel, spoke of four kingdoms succeeding one another. Babylon fell even while Daniel was living there. The Medes and Persians arose and Persia covered almost the whole earth. Greece came later with the sudden and overwhelming conquests of Alexander as Daniel describes in his eleventh chapter. After the Greeks would come a fourth kingdom, but only in the days of Messiah’s birth, and our story does not take us there as yet.

Daniel said that Alexander would be a mighty king with great dominion. But his kingdom would be broken four ways very soon after it arose. And two of the four parts of the Alexandrian legacy were the Ptolemies of Egypt and the Seleucids of Babylon and Syria. In between them were the people of Judah, those who had returned from exile in Babylon and dwelt with a rebuilt Temple in their midst.

All around Judah the world was changing. Hellenism was the fashion. Cities built hippodromes for public chariot races and horse races. Stadiums were built for games and the fashion was for athletes to participate without clothes. Races, wrestling, and other games entertained the people of the cities. The city was called a polis and there were libraries, courts, temples, and places for discussion and learning.

Judah was a backwards sort of place and for the most part the people wanted nothing to do with Olympian Zeus, nude games, and the Greek way of life.

But among the nobility, there were compromisers, people who wanted to see the old traditions disappear. Circumcision, they said, was barbaric. It was embarrassing for Jewish young men to participate in nude games where all could see their circumcisions. Some had unreliable and dangerous surgeries to try and reverse their circumcision. And many wanted to see the end of Torah study and Hebrew and Aramaic writing and conversation. The common Greek which was growing to be the world language was the language of sophistication.

Meanwhile, the Seleucids came to rule over the territory of Judah and put the Ptolemies back into Egypt. Eventually a new Seleucid monarch arose in 175 B.C.E., Antiochus Epiphanes. He called himself Epiphanes, manifestation of the gods. The Jews called him Epimanes or crazy one.

Antiochus Epiphanes put in his own high priest, someone not from the line of Aaron at all. He strongly supported the nobility in their desire to Hellenize the Jews. Antiochus loved Olympian Zeus. In time he built a hippodrome and made decrees forbidding circumcision. He installed a statue of Olympian Zeus in the Temple and had priests, many of whom were already Hellenized, offer swine in the holy Temple of Hashem.

But Antiochus read the whole situation wrongly. The enthusiasm for Greek ways was only a thin veneer or nobles who aspired to greater wealth and power. The people of Judah were not with these changes.

So, when a envoy came to the town of Modi’in to enforce the new ways, Mattathias and his sons rose up. There were already Torah-faithful groups who had given martyrs and formed bands in the wild places of Israel. Mattathias and his sons became the leaders of these groups of Hasidim, pious ones. It would be Hasidim versus Hellenists in Israel.

The Hasidim quickly grew and the Hellenists would have been in trouble except that Antiochus had the greatest armies in that part of the world. But God had already been at work and there was another factor in the favor of the Hasidim. The armies of Antiochus and the wealth of Antiochus had already been harmed by trouble with Rome. Rome was not yet an empire, but they were already a force to be reckoned with, having defeated Hannibal and the Carthaginians in a great battles in Africa. Antiochus’ father had supported the wrong side and made an enemy of Rome. Rome had demanded a huge tribute from the Seleucids and had greatly reduced the military which Antiochus had available.

In many battles the Hasidim, led by the sons of Mattathias, who were now called the Maccabeans, the Syrian mercenaries were defeated. Eventually the Maccabeans took the Temple back. They cleansed it and declared an eight day celebration, since the people had missed Sukkot. Hanukkah is eight days because it was in that year a late celebration of the Feast at the Temple.

Hanukkah is about the time the Jewish people were almost exterminated. There was no Haman or Hitler here, but something more subtle. Even Antiochus was not as much the bad guy as the temptation among the Jewish people to assimilate and adopt the ways and customs of the world.

We know from the Israelite prophet Daniel that other Antiochuses will arise. In the last days there will be a ruler who also makes decrees against the ways of God. People will be tempted to go along with economic advantage and the pull of popular power.

But God promises that Israel in the last days will be circumcised in heart and will not give in to the wickedness of smooth things. And in the history of Israel there have been some leaders whose voices called for a renewal within that would bring such renewal to Israel in the here and now.

The greatest of these was Yeshua, the son of Joseph the Nazarene. One Hanukkah he stood in the Temple and challenged his generation to a renewal which was far more important than war, kingdoms, and power. Who are your shepherds, he asked his people, the kind who rob and steal or the kind who lay down their life for the sheep?

Yeshua said that his sheep would hear his voice. His sheep would have the eternal life of the last days here and now. At Hanukkah he declared that he was the good shepherd, the last David, who would bring his people home. But his generation was not ready. When he declared that he was not only sent by God, but also one with God, the people around him wanted to kill him for blasphemy.

Yet Yeshua did have disciples, Hasidei Yeshua, the pious ones of Yeshua. And the early ones became men and women of great renown. James, the leader of the Yeshua-followers in Jerusalem, was a man of unimpeachable reputation amongst the Jewish leaders and Torah-faithful of the time.

The miracle of Hanukkah is the preservation of Israel’s people and the continuation of the covenant promises that God will heal and deliver Israel. The one who heals the people of Israel is Yeshua, the man who said at Hanukkah he was one with the Father, the one who said he is the good shepherd of Israel who leads his people to circumcised hearts and eternal life.

When a new Antiochus will arise, as foretold in Daniel, and will greatly trouble Israel again, it will be Yeshua who comes to deliver his people. In the meantime, we are the Hasidei Yeshua, the pious ones of Yeshua, who stand firm in faithfulness to God’s ways and who do not compromise. Great movements of salvation do not usually look impressive, but when the times get difficult, the ones who shine are revealed.

IT guy working in the associations industry. Formerly a congregational rabbi. Dad of 8. Nerd.
View all posts by Derek Leman →
This entry was posted in Holidays, Judeo-Christian, messianic, Messianic Jewish, Messianic Judaism and tagged Hanukkah. Bookmark the permalink.