Joseph and the Covenant of Blessing 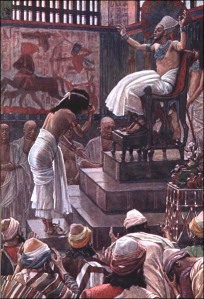 The Joseph stories have long been thought to be more than simple reporting of the life of the patriarch. Too much resemblance between Joseph’s life, and the life of all the patriarchs, and Israel’s later history is present to ignore.

The theme of Joseph’s life is Genesis 12:3, “I will bless those who bless you, and him who curses you I will curse; and by you all the families of the earth shall be blessed.” Note: I carefully avoided the rendering “bless themselves by you,” found in some translations of Genesis 12:3 and could write a good case for the passive translation here..

The story of Joseph is the crux, the expression of God’s wisdom for the ages, his plan of redemption through mutual blessing.

The best commentary on Joseph’s life I have read is in R. Kendall Soulen’s The God of Israel and Christian Theology, which has much resemblance to what I am saying here (though I am not following his reading specifically).

Joseph’s bondage in Egypt obviously prefigures Israel’s coming enslavement and oppression. Yet the mutual blessing principle immediately takes effect in Joseph’s tragedy. The Lord “was with Joseph and he became a successful man” (39:2). Joseph’s divine favor became a blessing for Potiphar, who prefigures the nations in relation to Israel.

Nations who receive blessing from Israel are to bless Israel in return and then receive more blessing.

Joseph’s imprisonment also finds him in divine favor (39:21). This prefigures Israel in exile, seemingly humiliated and defeated, but nonetheless having God’s Presence and blessing. The nations cannot look at the appearance of Israel’s circumstances and judge the truth of the situation. The blessing hides in exile and suffering. Tragedy does not annul the promise.

The exact nature of Israel’s blessing is revealed while Joseph is in prison. God gives him revelation, specifically by giving him wisdom to interpret prophecy in dreams. First for the cupbearer and baker and then for Pharaoh himself, Joseph is the deliverer of divine oracles. As Joseph says to Pharaoh’s court, “Not I, but God will answer to Pharaoh’s welfare” (41:16). As the Egyptians say to Joseph, “Can we find such a man as this, in whom is the Spirit of God?” (41:38).

It is mutual blessing. It moves from Israel to the nations and back again.

It takes more than the Joseph story, I realize, to make that claim evident. But if Judaism is not even looking for a mutual blessing scenario to happen, if Judaism is not taking seriously the power of the Abrahamic promise to save all the families of the earth, then Judaism is failing, equally with Christianity, to witness God’s redemptive covenant taking place in history.

1 Response to Joseph and the Covenant of Blessing