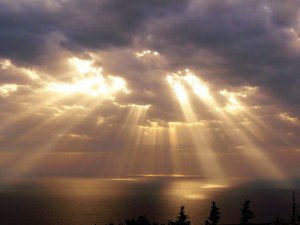 I’m giving a Skype lecture Wednesday night to a small group in Texas about mysticism and the Bible. So, naturally, my mind is on the subject this week and I’m putting down some rather random notes. Glimpses into mystical horizons occur regularly and frequently through the Torah, prophets, writings, gospels, apostolic letters, and the apocalypse of the New Testament (you know, Revelation).

I’m not suggesting that I am an expert on mysticism or even biblical mystical texts. I’m more of an enthusiast.

There are a number of aspects of mysticism in the Bible that interest me. First, the idea that there are supra-rational expressions of God’s nature and deeds intrigue me. I am a recovering rationalist. Second, expressions of God’s nature that differentiate between his Direct Being and his Radiated Essences fascinate me: the Word (Memra, Dibbur, Logos), the Image, the Spirit, the Presence, the Glory, the Cloud, the Fire, the Son, etc. Third, the experiential aspects of knowing God that transcend reason seem desirable to me as ways of seeking a deeper dimension of life. I don’t appreciate cheap references to deeper experiences which are empty of all meaning and are merely used to imply religious superiority. In other words, if I look into experiential ways of seeking the depths of God, I desire honesty. That usually means admitting frustration.

Here are some not-so-organized thoughts on mysticism in the Bible.

Heschel on the Supra-Rational

Not only are the problems of philosophy not identical with the problems of religion; their status is not the same. Philosophy is, in a sense, a kind of thinking that has a beginning but no end. In it, the awareness of the problem outlives all solutions. Its answers are questions in disguise; every answer giving rise to new questions. In religion, on the other hand, the mystery of the answer hovers over all questions.
-God in Search of Man, Abraham Joshua Heschel

The rational (a.k.a. philosophy) says Heschel hits a wall of unknowing due to our human limitations. Presumably unlimited reason (the mind of God) would be able to reach the end of all knowing. But our mind is not God’s.

Therefore, reason brings us to a point of unknowing, a point at which “awareness of the problem outlives all solutions.” To put it simply: reason is better at asking questions than answering them.

This is the genius of postmodernism and also the depressing reality of postmodernism. All answers can be deconstructed. Nothing can be proven. Everything can be questioned. The result is nihilism or solipsism if you follow reason to its end. Nihilism means the lack of any meaning. Solipsism means finding ourselves trapped in an imaginary world of our own thoughts (e.g., the Matrix, or the end of the movie “Inception”).

But, Heschel says, in religion, “the mystery of the answer hovers over all the questions.” Perhaps he means by this (and Heschel’s thoughts on this were far more advanced than mine, so I can only surmise) that we perceive with more than our reason, we perceive the vastness of God and that all questions are answered in him even if we do not understand.

Yeshua on the Supra-Rational

I thank you, Father, Lord of heaven and earth, that you have hidden these things from the wise and understanding and revealed them to babes; yes, Father, for this was well pleasing to you. All things have been delivered to me by my Father; and no one knows who the Son is except the Father, or who the Father is except the Son and any one to whom the Son chooses to reveal him.
-Luke 10:21-22

The infamously mystical gospel is John. So it pleases me to find the mystical outside of John and in a synoptic gospel. Mark is more apocalyptic than mystical. Luke emphasizes the delay of the Second Coming and the role of faith and the Holy Spirit in the experience of disciples who are waiting.

In this saying, Yeshua indicates that “knowledge” is not directly related to power, position, or learning. The wise have missed the mystical revelation of Yeshua’s identity. But it has been made known to lesser minds, to childlike minds. In this case, the childlike minds are the seventy (or seventy-two in some manuscripts) who have experienced the indications of God’s kingdom existing on earth. They have tasted the powers of the age to come.

It is pleasing to God to do things against the grain, to defy logic, to shatter the expected.

No one knows the Father (God in his Direct Being, I suggest is the way to understand “Father,” or Ein Sof as we say in Jewish mysticism). Knowledge is inadequate to reach the Direct Being of God. He is the God of Unknowing.

But the Son (God in his Radiated Essence, or the Sefirot or Emanations as we say) knows him and can reveal him supra-rationally. Some will say what the Son does is not supra-rational. He brings the signs of the kingdom into history (illness healed, evil defeated, death conquered) and those who accept the very rational means of revelation Yeshua offers can know God.

This objection is true to a point. But Yeshua is saying more. The kind of “evidence” God offers is not completely received by wisdom or knowledge, but by faith. And faith has a supra-rational element that pleases God.

Mysticism in theology differs from perspectives which are more scientifically logical. . . . Mystical theology distrusts the theological perspective which rejects the irrational absurdity as long as life retains the irrational.
-Love and the Messianic Age, Paul Philip Levertoff

In other words, life isn’t completely logical. In no area is this more true than in relational or personal knowledge (knowing someone).

Mystical Glimpses in the Bible
TORAH: The words of creation in Genesis. The image of God, the Spirit of God in Genesis. The garden of God cut off from humanity and guarded by angels. The hand of God that shuts the Ark. The walking, talking form of God that discusses justice with Abraham. The fear of Isaac. The voice atop the stairway Jacob sees. The one who was with Joseph but never appeared or spoke. The cloud with the fire inside in Exodus. The appearances atop Mt. Sinai and in Leviticus 9-10. The Glory filling the Tabernacle in Exodus 40 and the levels of the Glory that Moses encountered, especially in Exodus 33-34. The Presence in the Tabernacle.

PROPHETS: Some glimpses in the former prophets. Many more in the latter. Especially Ezekiel’s visions of the chariot and Isaiah’s vision of the train of his robe and Zechariah’s sense of the day when his Name will be One.

WISDOM: The pre-existent wisdom through which all things are created, especially in Proverbs 8. The Holy One of Proverbs 30 that is beyond knowing. The mysteries of Job 38-41. The un-plummable depths of wisdom in Job 28. The elusive answer in Ecclesiastes. The Ancient of Days and the Son of Man in Daniel.

EPISTLES: The one who ascended into the third heaven in 2 Corinthians 12. The uniting of all things in Messiah in Ephesians 1. The one who descended into human form in Philippians 2. The God and Lord of 1 Corinthians 8. The Radiance of His Glory in Hebrews 1. The One in Whom All Things Adhere in Colossians 1 (and the Image of the Invisible God).

APOCALYPSE: Pretty much the whole thing.

IT guy working in the associations industry. Formerly a congregational rabbi. Dad of 8. Nerd.
View all posts by Derek Leman →
This entry was posted in Bible, Mysticism. Bookmark the permalink.