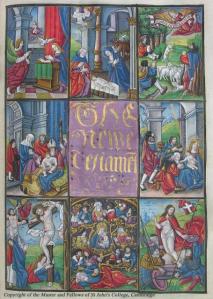 A commenter on the Jesus Creed blog, where I guest-posted recently about Richard Harvey’s book, Mapping Messianic Jewish Theology, said that someone asked N.T. Wright (famed scholar of the New Testament) if he was supersessionist. Wright said that he was not.

The thing you can learn from a good book on the subject (we’ll be learning from a great one, Soulen’s The God of Israel and Christian Theology) is that supersessionism is not just overt anti-Judaism. Supersessionism is far more pervasive in Christian theology and far more surreptitious (that means sneaky). My guess is that Wright thought to himself, “I am very sensitive to Jewish issues, I am sympathetic to Judaism, and therefore, my ideas are not supersessionist in nature.”

Yet, the sad truth is, Wright is a supersessionist, even if he doesn’t realize it. He sees Judaism as subsumed in Christ and that there is not an ongoing, active role for Israel as the freely elected, irrevocably chosen people of God.

How does someone who understands Judaism so well and who writes some of the best historical sketches of Second Temple Judaism in all of academic literature wind up nonetheless being a supersessionist?

The very idea of supersessionism is just so darn hard to shake from within Christian theology.

R. Kendall Soulen’s The God of Israel and Christian Theology is a book that stands out from the crowd of books on the subject. This is the singular most intelligent, constructive, and incisive treatment of the topic.

On pg. 29, Soulen cites one example of supersessionism, from Melito of Sardis, the second century church father:

This little theological poem is an example of economic supersessionism: the idea that Israel is subsumed and made obsolete under the new economy of Christianity (or New Covenant or however you would like to express the new economy brought to us in Christ).

Economic supersessionism need not be anti-Judaic. You can admire a fossil. You can write about its history, the beauty of the creature that became the fossil. You can even say charitable things about those who continue to exist according to the pattern of the fossilized creature. But you believe nonetheless that the being that gave arise to the fossil can only continue meaningfully by switching to the new economy.

Often hand in hand with economic supersessionism is punitive supersessionism: Israel’s place is surrendered due to lack of faith in Christ. The “punitive” in punitive supersessionism does not always indicate that the church punishes Israel (though historically, this happened more often than not in numerous slaughters, burnings, pogroms, and eventually the ovens of the Nazi party). Rather, punitive indicates that the removal of Israel from its place as the covenant people of God is a punishment for failure to believe in and follow Christ. However, the church often took it upon itself to be the avenging agent of God against the Jews.

Melito of Sardis has a poem about this as well:

You might possible eradicate economic supersessionism from your theology and expunge every trace of punitive supersessionism and still have a problem. You can say all day long, “I continue to believe Israel is God’s chosen people,” and yet be a supersessionist in a subtle and pervasive way.

How is this so?

The most pervasive, subtle, and sneaky form of supersessionism is structural supersessionism: reading the overarching narrative of the Bible in such a way that Israel is a footnote in history.

Soulen introduces a concept called the canonical narrative. It means the way you see the big story arc of the Bible, the metanarrative, the overarching tale.

God created us. We fell away from him. He sent a redeemer to bring us back. The redeemer will return to consummate all things.

Consider how the SCN makes use of the Bible:

The Bible of the SCN is greatly abridged. You could take your Christian Bible, cut out Genesis 4 through Malachi 4, and not lose a drop. Copies of the New Testament could be printed with Genesis 1-3 as an introduction and a selection of Messianic prophecies appended, and little would be lost.

The SCN is structural supersessionism because in the very structure of its understanding of the Bible, Israel is a footnote.

We would do well to ask ourselves, why didn’t God bring the redeemer right away, before Abraham and Moses and all that inconvenient stuff?

At the very least, we need to embrace a canonical narrative that recognizes God sunk his presence into the “carnal soil” of history (the term was coined by Michael Wyschogrod, an Orthodox Jewish theologian, and is used by Soulen). Israel is the carnal soil into which God’s presence was placed in human history. To make a long story short, in a foolproof manner, not dependent on complete faithfulness from Israel, God’s presence on earth, his incarnation, was through the people Israel.

Ultimately the incarnation settled in its ultimate form in a son of Israel.

Our canonical narrative at the very least needs one more step, and creative ways of restructuring it should be thought out:

So, if you want to develop a theology which rids itself of all supersessionism, which assumes that God did not waste anything in his economy of redemption, that nothing is purposeless in the Biblical story arc, you need not only to get rid of economic and punitive supersessionism, but also structural.

And this is a paradigm change in theology. I suggest Soulen’s book as one great attempt on the way. I find his rebuilding of the canonical narrative persuasive. Others are possible.

Discussion Starter
Are you prepared to accept the three levels of supersessionism (punitive, economic, structural)?

What is the continuing role of the Jewish people in a theology that eliminates supersessionism?