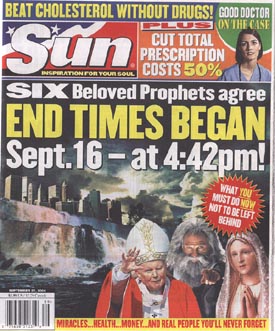 There are five fulfillment sayings in Matthew 1 and 2. In four of the five Matthew says these things happened to “fill up” [usual translation “fulfill”] some aspect of Israel’s story:

#1, Matt 1:22-23 All this took place to fulfil what the Lord had spoken by the prophet: “Behold, a virgin shall conceive and bear a son, and his name shall be called Emmanuel”

#2, Matt 2:4-6 and assembling all the chief priests and scribes of the people, he inquired of them where the Christ was to be born. They told him, “In Bethlehem of Judea; for so it is written by the prophet: ‘And you, O Bethlehem, in the land of Judah, are by no means least among the rulers of Judah; for from you shall come a ruler who will govern my people Israel.’”

#3, Matt 2:14-15 And he rose and took the child and his mother by night, and departed to Egypt, and remained there until the death of Herod. This was to fulfil what the Lord had spoken by the prophet, “Out of Egypt have I called my son.”

#4, Matt 2:16-18 Then Herod, when he saw that he had been tricked by the wise men, was in a furious rage, and he sent and killed all the male children in Bethlehem and in all that region who were two years old or under, according to the time which he had ascertained from the wise men. Then was fulfilled what was spoken by the prophet Jeremiah: “A voice was heard in Ramah, wailing and loud lamentation, Rachel weeping for her children; she refused to be consoled, because they were no more.”

#5, Matt 2:23 And he went and dwelt in a city called Nazareth, that what was spoken by the prophets might be fulfilled, “He shall be called a Nazarene.”

There is a common but insufficient way of reading these. It is a sort of “just-the-facts” approach or, as I called it in my last post, the prophets’ precise prognostication approach. It views these five fulfillments as non-story

THE NON-STORY APPROACH
The first one is about an angel talking to Joseph and saying: your wife is a virgin and she will bear a son who will save Israel. This is all something that Isaiah foretold. Isaiah said, “A virgin will get pregnant and will give birth to Messiah.” So it happened just as Isaiah foretold when Messiah was born.

The second one is about the place Messiah was born. Micah foretold where Messiah would be born. And, keeping prophecy intact, Yeshua was born there.

The third one is about Yeshua’s journey into Egypt. Hosea the prophet foretold that God’s son would go into Egypt and be called out. In keeping with prophecy, Yeshua went into Egypt as a baby and was called back out as a child.

ANALYSIS
What is insufficient with this way of looking at the five fulfillments in Matthew’s story?

A lot is wrong with it. For one thing, there are only two out of five of these fulfillments that you could even argue are really what the prophet was talking about.

Depending on how you interpret the first one, Isaiah 7:14, you might think Isaiah was predicting the whole Mary, virginity, and birth of Messiah thing. In the second one, we can say with some certainty that Micah 5:2 really was about Messiah being born in Bethlehem.

But what about the other three? For the third one, if you go back and check, you’ll see that Hosea wasn’t talking about Messiah at all. Hosea 11:2 is talking about Israel as God’s son being called out of Egypt at the Exodus. For the fourth one, you can check and see that Jeremiah 31:15 is not talking about the days of Messiah either. Jeremiah is talking about the children who died in mass numbers when the Babylonians attacked Israel in his time. For the fifth one, you will especially have a problem. You can search your Hebrew Bible from Genesis to Malachi and not find anywhere that says, “He shall be called a Nazarene.”

So what is really going on?

What’s really going on is Matthew finding the patterns of Israel’s story in the story of Yeshua. Matthew is not using these to prove anything. He is using them to help those who already believe see the incredible way that God works in history and in the life of his Son.

There is a better way to read the five fulfillments of Matthew 1 and 2. It is a reading that sees the echoes, the recurring patterns of Israel’s story.

IT guy working in the associations industry. Formerly a congregational rabbi. Dad of 8. Nerd.
View all posts by Derek Leman →
This entry was posted in Bible, Christian, Judaism, Messianic Jewish, Theology, Yeshua. Bookmark the permalink.